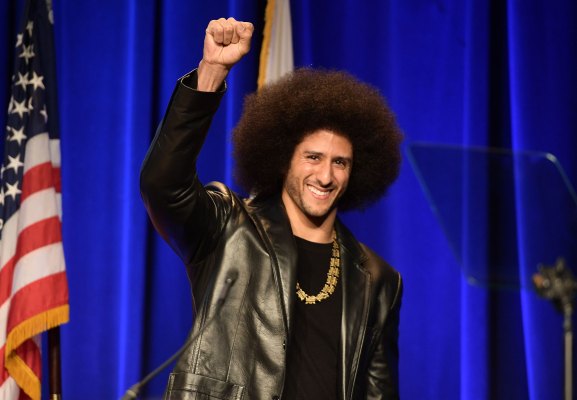 EA became the subject of online scrutiny this week when it was discovered that the gaming giant deleted a reference to Colin Kaepernick on the soundtrack for Madden 19. The former 49ers quarterback was name-checked by rapper Big Sean on a verse of the YG song “Big Bank,” only to have the mention deleted. The track includes the line, “You boys all cap, I’m more Colin Kaepernick.”

The move was noted on Twitter this week and amplified by radio host (and Kaepernick’s girlfriend) Nessa Diab, along with Big Sean himself. The latter said the reference was deleted “like it was a curse word,” adding, “he’s not a curse, he’s a gift! Nobody from my team approved any of this.”

Kaepernick became a leading figure in the Black Lives Matter movement after sitting and later kneeling during the National Anthem as a form of protest against black deaths at the hands of police officers. A number of NFL players have since followed suit, leading Donald Trump to call for the firing of players over on-field protests.

In a statement to TechCrunch, EA called the deletion “an unfortunate mistake,” chalking up the move to confusion of relating to player rights:

We made an unfortunate mistake with our Madden NFL soundtrack. Members of our team misunderstood the fact that while we don’t have rights to include Colin Kaepernick in the game, this doesn’t affect soundtracks. We messed up, and the edit should never have happened. We will make it right, with an update to Madden NFL 19 on August 6 that will include the reference again. We meant no disrespect, and we apologize to Colin, to YG and Big Sean, to the NFL, to all of their fans and our players for this mistake.

NBC Sports notes, however, that this is apparently not the first time Kaepernick’s name has been removed from a Madden soundtrack. While the player’s likeness appeared in last year’s version of the game, his name was apparently also removed from the Mike WiLL Made-It track, “Bars of Soap.”