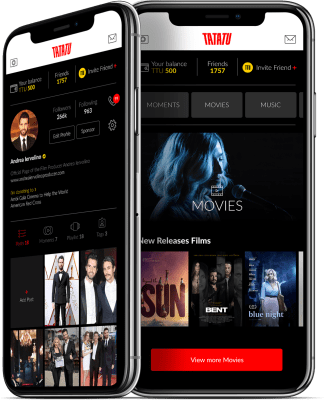 With so much controversy swirling around the advertising-driven business models typified by Facebook and Google, and the increasing rigours of regulations like GDPR, it’s no wonder the Blockchain world is starting to whet its appetite at the prospect of paying users for attention with crypto assets.

Now a company involved in the production of Hollywood blockbusters featuring the likes of James Franco, Selena Gomez, Alec Baldwin, Heidi Klum and Al Pacino is backing a new startup to reward viewers in this manner.

Hollywood producer, Andrea Iervolino (best known for backing the James Franco film “In Dubious Battle” based on the novel by the Nobel Prize-winning author John Steinbeck) has decided to enter the fray by launching a new blockchain platform called TaTaTu. The startup’s aim is to bring a social, crypto economy to the entertainment industry.

Iervolino says the platform ill allows users to get rewarded for the content they watch and share with others through the use of crypto tokens. Of course, whether it can actually pull that off remains to be seen. Many other startups are trying to play in this space. But where Iervolino might just have an edge is in his Hollywood connections.

The idea is that the TaTaTu token can also be used by advertisers to run their ads on the platform. Organisations will also be able to earn tokens by uploading content to the platform. The more content an organisation brings to the platform, the more revenue they earn. TaTaTu aims to show ads to viewers and will even share advertising revenues with them in return for their attention.

But it doesn’t stop there. Users are supposed to invite their friends via their social media to join TaTaTu, and then watch and create videos that can be shared with friends, chat with other members, and share the content they like. TaTaTu will give its users the possibility to be rewarded for their social entertainment activity. TaTaTu plans to not only movies and videos, but also music, sports, and games. So this is quite a grand vision which, frankly, will be tricky to pull off outside of perhaps just sticking to one vertical like movies. This is like trying to do YouTube and Netflix at the same time, on a blockchain. Good luck with that.

But Iervolino is putting his money where his mouth is. The AMBI Media Group, a consortium of vertically integrated film development, production, finance and distribution companies (which counts End of Watch, Apocalypto, and The Merchant of Venice among its title) and which he co-runs with Monaco-based businesswoman Lady Monika Bacardi, is said to have put in $100M via a token pre-sale.

Building the platform will be CTO Jonathan Pullinger who started working in the Bitcoin space in late 2012, developing crypto mining software and building mining rigs. Since then he has worked on several Blockchain projects, including Ethereum smart contracts (ERC-20 tokens and other solidity based solutions), Hyperledger, Fabric, the Waves Platform and lightning nodes.

Amazon Spark, the retailer’s two-year-old Instagram competitor, has shut down

To measure sales efficiency, SaaS startups should use the 4×2

CES 2022: You can now try Visible's network for free before making the switch

Google acquisition of Siemplify is a knockout punch for standalone SOAR

NoReboot attack fakes iOS phone shutdown to spy on you