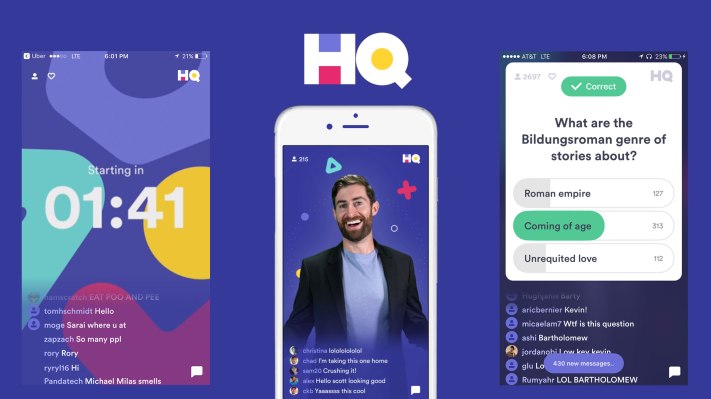 HQ Trivia, the TV-style game show in an app, is starting to make money. The company this week is rolling out its first sponsored games, including a $3 million deal which includes sponsored games from Warner Bros., as well as a sponsored game from Nike, arriving today.

AdAge was the first to report on HQ Trivia’s deal with Warner Bros., which is using the popular live trivia app to promote three movies, beginning with Steven Spielberg’s “Ready Player One.”

According to the report – which HQ Trivia declined to comment on at the time – the overall deal with Warner Bros. is worth $3 million, and will include a $250,000 jackpot on a sponsored game that promotes “Ready Player One,” airing on Wednesday.

The jackpot would be the largest ever seen on the HQ Trivia app, AdAge noted. (HQ Trivia confirmed this is the case, in an email to TechCrunch.) The biggest jackpot the app had seen until now was the $50,000 prize from the game that aired on March 4, 2018, the night of the Academy Awards. The game also saw its peak audience that night, with 2.18 million people logged on at the same time, the company said.

Nike confirmed to TechCrunch it will be hosting a surprise game today, on Air Max Day – Nike’s made-up shoe-celebrating holiday.

Nike’s game will offer a $100,000 prize pot, along with some sort “prize that money can’t buy” for 100 winners. While neither HQ Trivia nor Nike would provide more information on what that prize may be, folks on Twitter are speculating it’s some sort of special edition shoe to tie-in to Air Max Day.

The Nike game will be a separate, surprise game that airs in addition to its regular games, HQ Trivia tells TechCrunch. Typically, HQ Trivia runs games at 3 PM EDT on weekdays and 9 PM EDT every day.

These sponsored game launches are notable because they represent HQ Trivia’s first serious attempts at generating revenue. But they don’t come as a surprise.

The company has said for some time that it would collaborate with brands as a means of making money. For example, it told Variety in December that the focus with its brand deals would be on enhancing gameplay. And when HQ Trivia recently announced its $15 million round of funding, it again reiterated how it would work with brands to sponsor questions or provide bigger jackpots in the future, instead of just running ads.

However, with bigger jackpots, there comes a bigger risk of cheating – something that’s been an increasing concern thanks to the numerous bots that have been built to help people answer questions accurately.

In fact, HQ Trivia recently kicked the remaining players out of a $25,000 game, which it followed up by tweeting that moderators kick people out who violate its terms and contest rules. The company never officially confirmed what the players did, but the general consensus is that they were caught cheating.

The HQ Trivia app is a free download on both iOS and Android.

Nintendo will offer SNES Classic pre-orders in the U.S. in late August

Snap is reportedly about to launch its own gaming platform