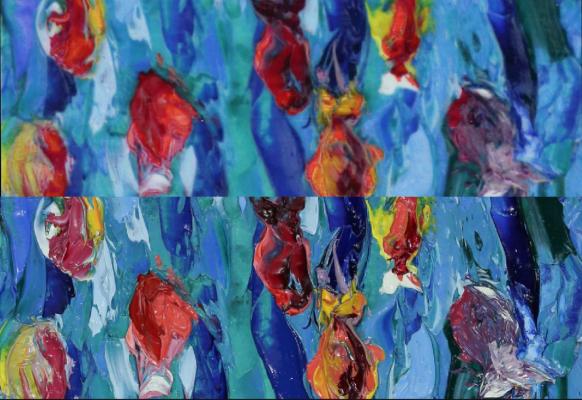 Researchers at MIT’s Computer Science and Artificial Intelligence Laboratory have created a system that can reproduce paintings from a single photo, allowing museums and art lovers to snap their favorite pictures and print new copies, complete with paint textures.

Called RePaint, the project uses machine learning to recreate the exact colors of each painting and then prints it using a high-end 3D printer that can output thousands of colors using half-toning.

The researchers, however, found a better way to capture a fuller spectrum of Degas and Dali. They used a special technique they developed called “color-contoning,” which involves using a 3D printer and 10 different transparent inks stacked in very thin layers, much like the wafers and chocolate in a Kit-Kat bar. They combined their method with a decades-old technique called “halftoning,” where an image is created by tons of little ink dots, rather than continuous tones. Combining these, the team says, better captured the nuances of the colors.

“If you just reproduce the color of a painting as it looks in the gallery, it might look different in your home,” said researcher Changil Kim. “Our system works under any lighting condition, which shows a far greater color reproduction capability than almost any other previous work.”

Sadly the prints are only about as big as a business card. The system also can’t yet support matte finishes and detailed surface textures, but the team is working on improving the algorithms and the 3D printing tech so you’ll finally be able to recreate that picture of dogs playing poker in 3D plastic.

Particle announces the Mesh board, an easy way to make your DIY talk to itself

This robot can build your Ikea furniture