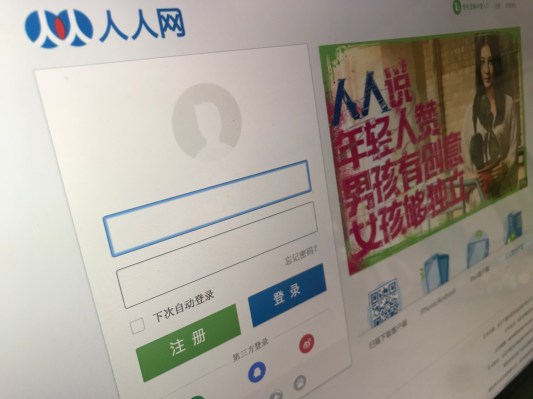 Renren, which was once heralded as the ‘Facebook of China’ and later became China’s answer to MySpace after falling out of fashion among its core young users, is selling its social networking business.

Renren’s parent company Beijing Qianxiang Wangjing has agreed to sell all tangible and intangible assets of renren.com to Beijing Infinities Interactive Media, according to a statement. As part of the deal, Qianxiang will receive $40 million worth of shares in Beijing Infinities, a $700 million firm that owns one of China’s major IT news sites DoNews.

“I am happy to find a home for renren.com,” says Renren’s chairman and chief executive officer Joseph Chen in the statement.

The social network won’t be foreign to its new home. On the list of the buyer’s shareholders is Oak Pacific Holdings, which Chen and James Liu, Renren’s executive director and chief operating officer, control.

Once a highflyer in China’s PC era, Renren’s prospects have faded as it fell behind peers like Tencent and Weibo in the mobile space. Its stocks hover around $2 today, compared with its spectacular moment at $84 when it debuted on the New York Stock Exchange in 2011. That put its market cap only behind Tencent and Baidu. Renren says it plans to remain listed in the US after disposing of its social networking arm.

Shedding its social network legacy, the company says, will allow it to focus on the more promising ventures. In recent years, Renren has diversified into areas outside the social space, including a used car platform in China, US-based transportation network Trucker Path, and a SaaS business in the US. The auto unit has been a key revenue driver, accounting for more than 90 percent of its total revenues in Q2 this year, a spike from 60 percent throughout 2017.

Renren has also been a prolific startup investor with a portfolio valued at $500 million (paywalled) after deducting debt, according to the Financial Times. The company was also mulling an ICO earlier this year but reportedly shelved the plan after talks with Chinese regulators.

These days, Chinese youngsters hang out on WeChat, QQ, Weibo, and increasingly Douyin – TikTok’s China version – but back in the PC days, teens and college students flocked to renren.com.

Like Facebook, Renren started from the dorm rooms at China’s top universities. Its founders aptly named it “Xiaonei”, which means “on campus”, when they started the site to target student users in 2005. Among its early founders was Wang Xing, who would go on to launch Meituan Dianping, a neighborhood services provider that has blossomed into a $300 billion giant listed on the Hong Kong Stock Exchange.

A year later, Chen bought out Xiaonei and merged it with his own Xiaonei rival. He later renamed the new entity to Renren, which means “everybody”. The social network flourished and got a further boost after China blocked its American competitor Facebook in 2009.

In its heyday, Renren had over 100 million active users. Today, it’s more like a time capsule, but its once loyal users haven’t erased it from their memories. In August, Renren staged a marketing stunt that got waves of internet users reminiscing their good old days on the site. Topics ranged from how they played browser games together and sent anonymous notifications to crushes. But the excitement was transient, and people soon resumed their routines on the mainstream social apps of 2018.

Renren has not mentioned plans to close down its forgotten social network, so users can still log in whenever they feel nostalgic, safe from the agony that their Path counterparts had to go through when the latter recently shuttered.