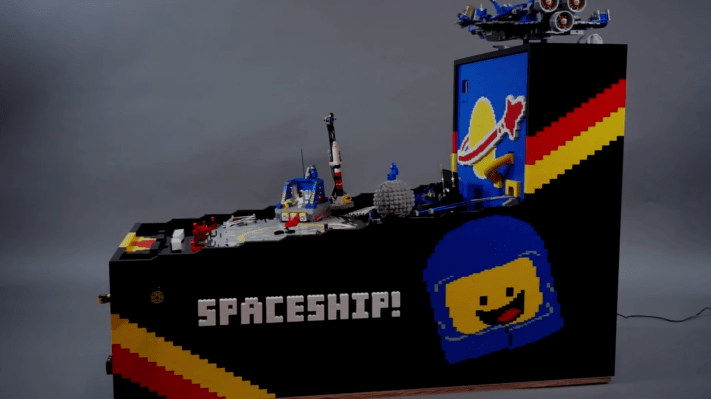 I’ve spent a good chunk of my life piecing together various LEGO projects… but even the craziest stuff I’ve built pales in comparison to this. It’s a fully functioning pinball machine built entirely out of official LEGO parts, from the obstacles on the playfield, to the electronic brains behind the curtain, to the steel ball itself.

Creator Bre Burns calls her masterpiece “Benny’s Space Adventure,” theming the machine around LEGO’s classic ‘lil blue space man. It’s made up of more than 15,000 LEGO bricks, multiple Mindstorms NXT brains working in unison, steel castor balls borrowed from a Mindstorms kit, plus lights and motors repurposed from a bunch of other sets. Bre initially set out to build the project for exhibition at the LEGO fan conference BrickCon in October of last year, and it’s just grown and grown ever since.

Bre told the LEGO-enthusiast site Brothers Brick that she’s spent somewhere between 200 and 300 hours so far on this project. Want to know more? They’ve got a great breakdown of the entire project right over here.

‘Ape Out’ and ‘Baba Is You’ demonstrate the depth of simplicity

The Herman Miller x Logitech gaming chair will set you back $1,500