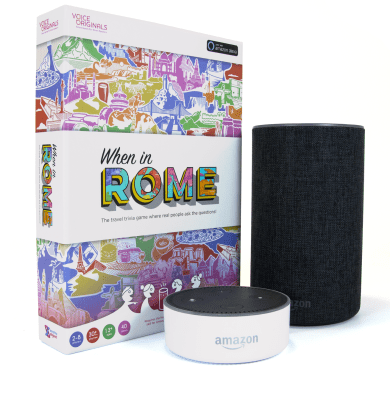 Years ago, in the heyday of home video, I played a board games that used VHS tapes and electronic parts to help spur the action along. From Candy Land VCR to Captain Power, game makers were doing the best they could with a new technology. Now, thanks to Alexa, they can try something even cooler — board games that talk back.

The first company to try this is Sensible Object. Their new game, When in Rome, is a family board game that pits two teams against each other in a race to travel the world. The game itself consists of a board and a few colored pieces; the real magic comes from Alexa. You start the game by enabling the When in Rome skill, then you start the game. Alexa then prompts you with questions as you tool around the board.

The rules are simple because Alexa does most of the work. The game describes how to set up the board and gets you started, then you just trigger it with your voice as you play.

The company’s first game, Beasts of Balance, was another clever hybrid of AR and real-life board-game action. Both games are a bit gimmicky and a bit high-tech — you won’t be able to play these in a cozy beach house without internet, for example — but it’s a fun departure from the norm.

Like the VCR games of yore, When in Rome depends on a new technology to find a new way to have fun. It’s a clever addition to the standard board-game fare and our family had a good time playing it. While it’s not as timeless as a bit of Connect 4 or Risk, it’s a great addition to the board-games shelf and a cool use of voice technology in gaming.

Demon’s Souls: The first truly next-gen game is a lopsided but impressive showcase