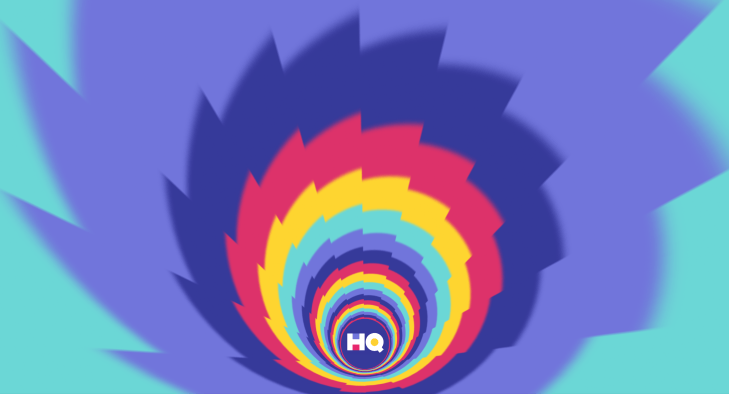 HQ Trivia’s app store ranking has continued to sink the past three months, but it’s hoping a new version on your television could revitalize growth. HQ today launched an Apple TV app that lets users play the twice-daily live quiz game alongside iOS Android players. “Everything about the game is still the same – same questions, same time, same rules,” says a spokesperson, except you’ll play with the Apple TV remote instead of your phone’s screen. But that might not be enough to get HQ’s player count rapidly growing again.

According to App Annie’s app store ranking history, on iOS HQ has fallen from the No. 1 U.S. trivia game to No. 10, from the No. 44 game to No. 196, and from the No. 151 overall app to No. 585. It’s exhibited a similar decline on Android. Analytics firm Sensor Tower estimates HQ has seen 12.5 million lifetime installs by unique users, with about 68 percent on iOS. “Installs have been on the decline. For last month, we estimate them with about 560K, which is down from their height of more than two million per month back in February,” Sensor Tower’s head of mobile insights Randy Nelson tells TechCrunch. 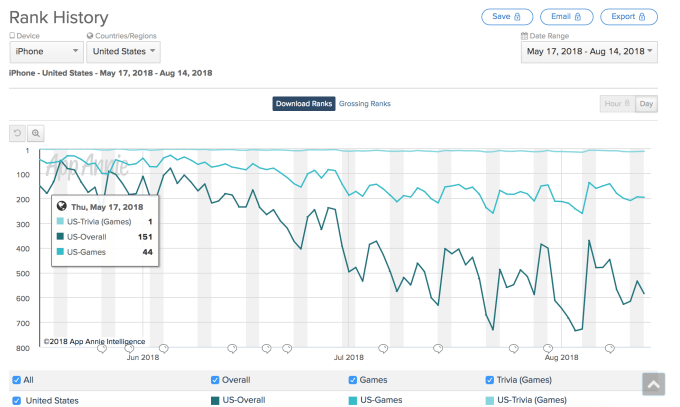 The question is whether this is just a summer lull as people spend time outside and students aren’t locked in the schedule of school, or if HQ is in a downward spiral beyond seasonal fluctuations. But if we zoom out, you can see that HQ has been dropping down the charts through the school year since peaking in January. At one point it climbed as high as the No. 3 game and No. 6 overall app. The app’s record high of concurrent players has also declined from a peak of 2.38 million in late March. 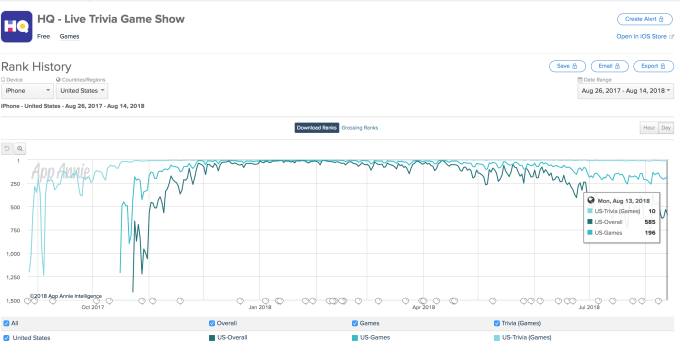 [Update: The CEO of HQ Trivia parent company Intermedia Labs and the former co-founder of Vine, Rus Yusupov, weighed in on the decline in downloads and HQ’s plans. He says, “Games are a hits business and don’t grow exponentially forever,” signalling the drop-off was expected and the team is still optimistic. But he also notes that HQ is “developing new game formats, one of which we think is really special and complements Trivia nicely”, indicating that HQ will branch out beyond its 12-question everyone vs everyone approach.]

Games are a hits business and don’t grow exponentially forever. HQ has massive early traction and still millions playing daily. Also developing new game formats, one of which we think is really special and complements Trivia nicely. More soon! Until then thanks for playing 🎮 https://t.co/wnAcztBuJU

Meanwhile, new clones keep popping up. After the initial wave of Chinese live trivia apps, now U.S. television studios are getting into the mix. This week Fox unveiled FN Genius, which looks and works almost exactly the same as HQ. One of HQ’s long-time rivals, Trivia Crack, where users play asynchronously over the course of days, also declined earlier this year, but has bucked HQ’s trend and started rising on the App Store charts again. There are also new 1-on-1 trivia games like ProveIt that let players bet real money on whether they can outsmart their opponent. 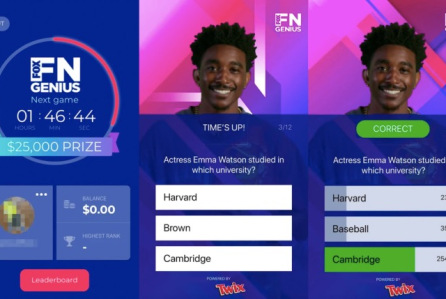 With themed games, celebrity hosts, big jackpots like a recent $400,000 prize and new features like the ability to see friends’ answers, HQ has tried to keep its app novel. But it’s also encountered cheaters and people playing with multiple phones that make normal players feel like they’ll never win. While the live aspect adds urgency, it also can feel interruptive with time as users aren’t always available for its noon and 6pm Pacific games. HQ may need to launch a second game app, come up with some new viral hooks or find ways to revive lapsed players if it’s going to make good on the $15 million its parent company raised in March.