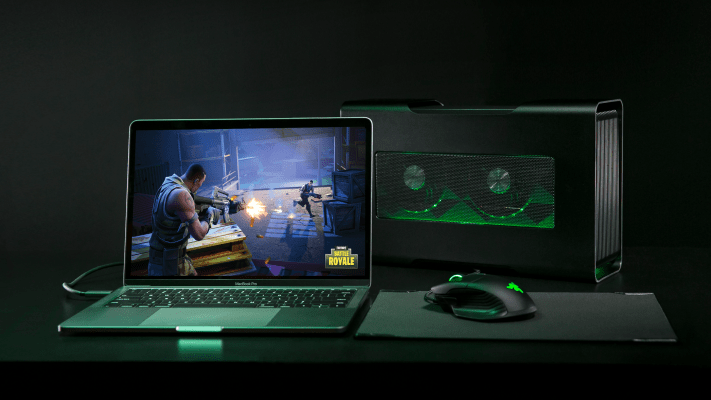 A couple of gaming hardware announcements just dropped from team Razer. What makes the Core X graphics enclosure arguably the most notable of the bunch is the inclusion of a standard Thunderbolt 3 connection on the rear of the device.

In addition to Razer’s own systems and Windows 10 PCs, the new enclosure is compatible with Apple products running macOS High Sierra 10.13.4. That’s part of a whole new focus on gaming for Apple’s devices, unveiled back at WWDC roughly this time last year, along with the promise of VR development support.

In late March, external GPU support officially arrived for High Sierra 10.13.4, and now Razer’s ready to get on-board. The Core X is designed to hold up to three desktop graphics cards and can charge a connected laptop through the aforementioned Thunrderbolt 3 connection.

The enclosure is available now for $299. Along with the X, Razer’s Core V2 is now also compatible with Macs via Thunderbolt 3. That one will run you $499. Good new all around for Mac users ready to get serious about gaming.

Also new today is the Razer Blade 15.6-inch, an ultra thin gaming notebook the company has taken to calling “the world’s smallest…in its class.” The 15.6-inch display comes 1920 x 1080, standard, which users can upgrade to 4k. All of that is surrounded by some skinny 4.9mm bezels.

Inside is an 8th gen Core i7 processor, coupled with either a either GeForce GTX 1060 or GeForce GTX 1070  graphics. There’s also up to 16GB of memory and up to 512GB of storage inside, loaded with what Razer says is $420 of games and software. The system features a 16.8 million color keyboard and output for up to three external displays.