The rapid consumer adoption of smart speakers like Amazon Echo and Google Home has opened opportunities for developers creating voice apps, too. At least that’s true in the case of Volley, a young company building voice-controlled entertainment experiences for Amazon Alexa and Google Home. In less than a year, Volley has amassed an audience north of 500,000 monthly active users across its suite of voice apps, and has been growing that active base of users at 50 to 70 percent month-over-month.

The company was co-founded by former Harvard roommates and longtime friends, Max Child and James Wilsterman, and had originally operated as an iOS consultancy. But around a year and a half ago, Volley shifted its focus to voice instead.

“When we were running the iOS business, we were always sort of hacking around on games and some stuff on the side for fun,” explains Child. “We made a trivia game for iOS. And we made a Facebook Messenger chatbot virtual pet,” he says. The trivia game they built let users play just by swiping on push notifications — a very lightweight form of gameplay they thought was intriguing. “Voice was sort of the obvious next step,” says Child.

Not all their voice games have been successful, however. The first to launch was a game called Spelling Bee that users struggled with because of Alexa’s difficulties in identifying single letters — it would confuse a “B,” “C,” “D” and “E,” for example. But later titles have taken off.

Volley’s name-that-tune trivia game “Song Quiz” was its first breakout hit, and has grown to become the No. 1 game by reviews. The game today has a five-star rating across 8,842 reviews. 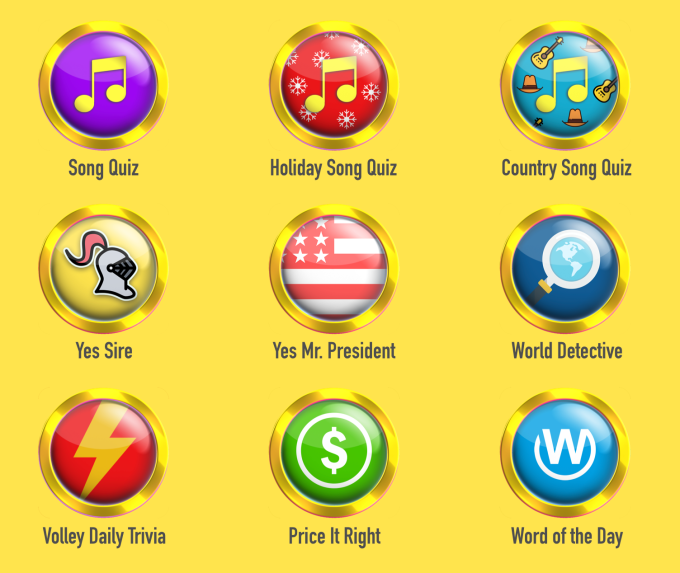 Another big hit is Volley’s “Yes Sire,” a choose-your-own-adventure style storytelling game that’s also at the top of Alexa’s charts. It also has a five-star rating, across 1,031 reviews.

The company says it has more than a dozen live titles, with the majority on the Alexa Skill Store and a few for Google Assistant/Google Home. But it only has seven or eight in what you would consider “active development.”

Unlike some indie developers who are struggling to generate revenue from their voice applications, Volley has been moderately successful thanks to Amazon’s developer rewards program — the program that doles out cash payments to top performing skills. While the startup didn’t want to disclose exact numbers, it says it’s earning in the five-figure range monthly from Amazon’s program.

In addition, Volley is preparing to roll out its own monetization features, including subscriptions and in-app purchases of add-on packs that will extend gameplay.

The company’s games have been well-received for a variety of reasons, but one is that they allow people to play together at the same time — like a modern-day replacement for family game night, perhaps.

“I think a live multiplayer experience with your family or people you’re good friends with, where you can have a fun time together in a room is fairly unusual. I mean, I don’t know about you, but I don’t crowd around my iPhone and play games with my friends. And even with consoles there are significant barriers in understanding how to play,” says Child.

“I think that voice enables the live social experience in a way that anyone from five years old to 85 years old can pick up immediately. I think that’s really special. And I think we’re just at the beginning. I’m not going to say we’ve got it all figured out — but I think that’s powerful and unique to these platforms,” he adds.

Volley raised more than a million in seed funding ahead of joining Y Combinator’s Winter 2018 class, in a round led by Advancit Capital. Other investors include Amplify.LA, Rainfall, Y Combinator, MTGx, NFX and angels Hany Nada, Mika Salmi and Richard Wolpert.

The startup is currently a team of six in San Francisco.